What’s all the buzz about? (TurfNet.com)

This article is from TurfNet.com and is written by John Reitman.
It didn’t take long for members at Westmoor Country Club to alleviate Bryan Bergner’s concerns about whether raising bees on the golf course was a good idea.

Instead of raising protests, members at this private club in suburban Milwaukee have been overly curious about the bees and, once they learn more about them and why Bergner is raising them, vigorously supportive of his efforts.
“I thought I’d get a lot of complaints and people being concerned about getting stung,” said Bergner, who had a custom hive built smack in the center of the golf course near the No. 15 green. “I’ve heard nothing but great things. The members have been very positive and supportive.”
Bergner’s curiosity was piqued earlier this year while attending a rooftop cocktail party in downtown Milwaukee. The party went on while bees came and went freely from a large bee-shaped hive on the same terrace.
“Bees were flying around everywhere,” said Bergner. “I couldn’t believe no one was getting stung.”
The only thing Bergner knew about bees then was that they are threatened by pesticides, parasites and loss of habitat. He thought raising them, to promote their comeback rather than start a second business producing honey, would be a good golf course project that helped the bees, the club and its neighbors.
“I thought if they could thrive on a downtown rooftop, they’d probably do really well on a golf course,” he said.
So Bergner set out to learn all he could about bees with the help of local expert and hive builder Charlie Koenen.
In May, Bergner stocked a hive from Koenen’s Beepods.com with 3 pounds of bees. Since then, Bergner estimates, the colony has grown nearly 10-fold. Although the thousands of bees living at Westmoor (Bergner plans to establish two more colonies next spring) help keep wildflowers at the club healthy and vigorous, bees have a working range of up to 7-10 miles, so their benefits are felt well beyond the walls of Westmoor. 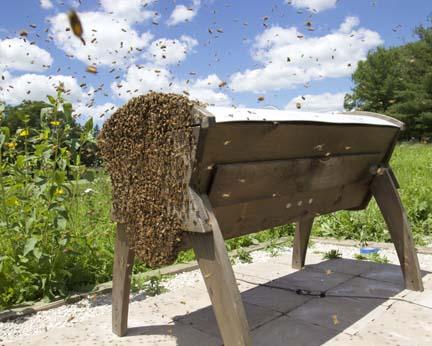 Bergner says he has yet to be stung, and insists the bees are more concerned about producing honey and maintaining their colony than they are stinging intruders. While Bergner was conducting a routine hive inspection late on a Sunday afternoon, a half-dozen golf-playing members stopped by to ask questions and learn more about the bees, and all were genuinely enthusiastic of the project. The bees, on the other hand, were content to ignore everyone and while hundreds buzzed about the air, not one sting was recorded. Even when thousands of bees swarmed to follow the queen when she left the hive this summer, onlookers were in awed, not afraid. Instead of asking whether they were in danger of being stung, members visiting with Bergner during his recent hive examination asked him if the bees would survive the winter in the Beepod contraption.
While wild bee populations have survived harsh winters for thousands of years, a manmade hive does not adequately protect the bees from the elements, especially strong winds accompanied by sub-freezing temperatures, so, Bergner soon will transport the hive to the shop’s cold-storage room, where they will live until spring.
Together, Koenen and Bergner conduct fear-alleviating educational sessions for members that the superintendent calls beesentations.
He also has reached out to nearby residents, who have responded positively after learning the source of the influx of bees that are helping area gardens to thrive.
The project has proven to have multiple benefits for Bergner as well, including serving as a stress reliever during the rigors of the golf season.
“It’s been a lot of fun,” he said. “I wish more golf courses would do this.”
It also has been fulfilling to know he’s doing something to help the local bee population. He’s even adopted a nighttime spraying program to prevent drift from reaching the colony, which is not active overnight.
“We’re a golf course and we spray pesticides. I spray things that would wipe bees out,” Bergner said. “But, I haven’t killed any bees yet, so I know I’m doing something right.”
This article is taken from Turfnet.com and speaks about one of Beepods best partners in the Milwaukee area.  For more information on this or to find out more, please Contact Us.
The following two tabs change content below. Bee The Change: An Interview With Detroit Hives